KYU & DAN PROGRAM
Its origin is in the close combat of the Samurai when they were on horseback. At closer distance they used spears, but spears only could be used once. As they approached yet closer, swords were used until they were so badly damaged that they had to fight with bare hands. 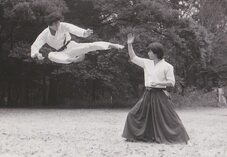 It is important to note that some Samurai were gentlemen and if one lost his sword, his opponent would also give up his and fight on an equal basis.
JUKEMPO has now developed to a point, as in KARATE, competitions are held. In SHIAI (contests), strikes can also be followed by throws.

Flexibility, speed and supreme body control are the characteristics of this breathtaking martial art, which dispenses with the use of weapons, but is nevertheless not unarmed: the use of arms and legs as exceptionally effective weapons in self-defense.